Blogger Bits is a feature that myself and a group of fellow bloggers will be tackling twice a month. Topics will vary, but will always have something to do with the book or blogging world.

Have a suggestion for a topic? Leave us a comment to let us know what you’d like to see us chat about!

This Fall is jam packed of new releases . . . any my TBR list is overflowing!

Here are some of the upcoming releases I am most looking forward too.

Bottoms Up by Holly Renee

From the moment I met him, I knew he was trouble.

He was reckless, cocky, and everything I shouldn’t want.

I had a life all figured out, and Tucker Moore was not a part of the plan.

But somehow I slipped.

One moment I had it all under control.

The next I was spiraling around him, begging him for whatever he would give me.

But as quickly as I fell for him, it all crumbled around us.

Because everything I thought I knew was far from the truth.

There was only one way to fix what we had done.

So I turned my world Bottoms Up.

Boss with Benefits by Mickey Miller

What if every fantasy you wrote about your boss came true?

Sebastian Blackwell isn’t only the sexiest man I’ve ever met.

He’s also my boss. The way our every interaction is laced with with sexual energy makes my already difficult job that much harder.

He turns me on so much, I constantly fantasize about him. To the point where I find myself writing at work about what would happen if we had an affair.

It’s not a big deal, I swear. This is meant to stay at the purely fantasy level.
Until he finds it.

The cocky bastard sees every word I wrote.

He keeps calling me into his office. Toying with me.

Every single fantasy I write about in my book… Sebastian makes come true.

This is supposed to be a purely ‘with benefits’ situation.

But this story has an ending even I didn’t see coming.

CRAP IN A CAULDRON.

What if you woke up tomorrow to find you’re no longer human?

Rosie hired Irish elf twins, Sheridan and Shivaun O’Malley for the newly formed Department of Interdimensional Trespass. They were wild and nearly feral, raised in the New Forest Preserve with no contact with the modern world until Black Swan made them the only female hunters other than Lady Elora Laiken.

When Sher was assigned as Finngarick’s partner, they were both stunned to find they weren’t only partners, but fated mates. Blissful fated mates who enjoyed each other for the span of less than a month before Sher was abducted by one of the very demons they hunted.

Meanwhile, the “Wild Bunch”, Black Swan’s new nickname for Rosie’s hunters, has its own problems.

Most girls dream of being princesses, but one princess just wants to be a normal girl.

Ella Carina, crown princess of Aelawyn, knows brutality and lies—she’s seen the way her father rules. Princess. Possession. To her father, the words had the same meaning. She was only as valuable as the alliance formed with her betrothal. Her freedom comes from an unlikely place: an attack on the castle.

When the conquering King offers to protect her from the betrothal her father arranged for political gain, she consents. Hiding her within a peasant family is the only way to keep her and her secret safe.

In this simpler life, Ella flourishes and catches the eye of the local Blacksmith’s son. For once, she can be herself and make her own choices, but the life of a princess—even one kept secret—was never meant to be easy.

Trevor, crown prince of Galder has been searching for Ella, but not because of their betrothal. She is in grave danger from the very people who hid her away. His plan is to show her the truth and help her to safety.

Nothing goes as planned. When Trevor finds her, it’s to discover she’s fallen in love with a peasant. Now he has two goals: help her regain her throne… and show her that she belongs with him. 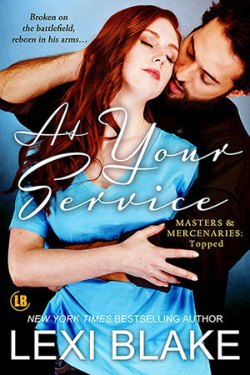 At Your Service by Lexi Blake

Juliana O’Neil’s promising future was burned away in the heat of battle. She had been an officer with a bright future in the military, but now she is struggling to survive. Her husband gone and her career in shambles, she finds a job at Top as a hostess and tries to put together the pieces of her life. The last thing she needs is any kind of male attention, but she can’t help but be amused at her neighbor and coworker’s lothario antics. Not that she would have anything to do with him, at least not for more than one night.

Javier Leones doesn’t understand monogamy. No woman could ever be enough for his endless libido, but he has to admit Juliana has his attention. For reasons he doesn’t fully understand, he can’t seem to get the gorgeous redhead with the sad eyes out of his head. After one scorching night together, he realizes he’ll never be able to get her out of his system. But with his reputation, he fears she’ll never see him as more than a one-night stand.

When their passions collide, these new lovers will be forced to confront Juliana’s past and come to terms with Javier’s present. Will they find their way or will this reservation be canceled at the last minute?

A Masters and Mercenaries: Topped Novel by Lexi Blake 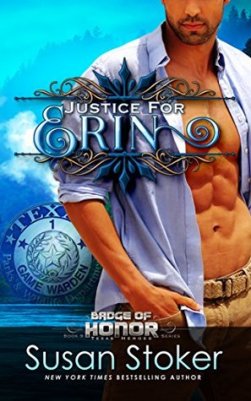 Justice for Erin by Susan Stoker

Part-time bartender Erin Gardner is friendly to everyone who bellies up to her bar, including the local law enforcement and firefighters who keep her city safe. That’s where she meets game warden Conor Paxton, a regular who she asks to join a canoeing trip she’s leading for her university day job. When the trip leads to something more, Erin couldn’t be happier.

Conor adores Erin, more than enough to help her continue to get over lingering self-esteem issues from her childhood. He’s thrilled he’s found someone who enjoys spending time in nature as much as he does.

Just when the couple thinks they’re on their way to a happily ever after, Erin finds herself in the wrong place at the wrong time. But there’s no way she’ll just lay down and die. She’s woman enough to save herself—and lead her man to her when she’s done.

** Justice for Erin is the 9th book in the Badge of Honor: Texas Heroes Series. Each book is a stand-alone, with no cliffhanger endings.

What books are you most looking forward to this fall?  Shout them out in the comments so I can add them to my TBR!

Make sure to visit these blogs to see their posts as well!  If you’d like to post about why you blog, tag us so we can stop by!