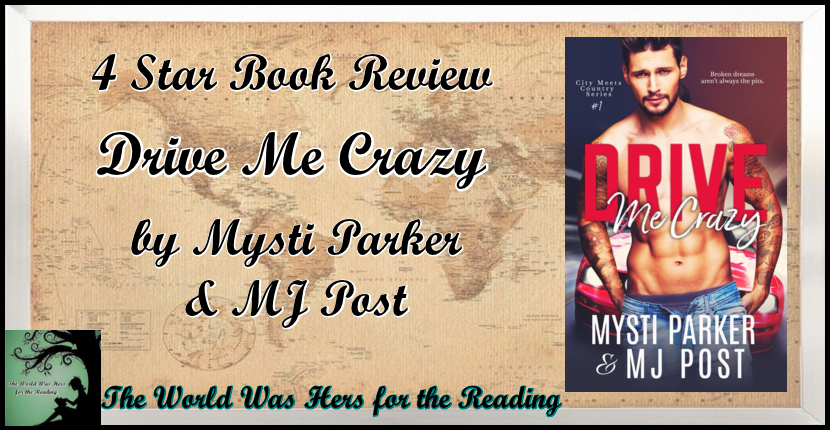 Just having graduated with a degree, country girl Ellison Carlisle is ready to give life in the big city a try when her college roommate convinces her to get a job in New York CIty.   She feels ready to take on anything, except maybe Luke Martelli . . . he’s a bad boy that she knows won’t be good for her.  so why can’t she get him out of her mind?

Luke Martelli loved working on fast cars.  His dream of working on a pit crew for race cars was gone in the blink of an eye when a freak injury ruined his knee making him too slow to keep up in the fast paced pit.   Now he’s got a carp job as a float builder for the city and a hot headed attitude with temper to match that pushes everyone away, including the sexy new country girl whose new job has them crossing paths more than he would like since he’s definitely interested in her gorgeous curves and smart talking mouth.

When they finally decide to give dating a try,, will they find out if they have more in common than just their explosive chemistry, or will their opposite backgrounds leave them with nothing in common?

Drive Me Crazy was the first book I have read by Mysti Parker or MJ Post.  It had a cute opposites attract plotline with characters that had more in common than they ever could have realized.  Luke, really has a chip on his shoulder.  Underneath he is a nice guy, but growing up in a macho Italian family leaves him feeling less than successful with his knee injury.  Ellie is sweet and intelligent, yet has been burned by relationships in the past which has her being very cautious where Luke is concerned.  These characters are a great match together, and it was fun watching them open up to one another as they explored their relationship.

I did find the plot a bit slow to start and it took me a bit to get into the storyline.  I found myself getting caught up in the explanations of the Italian phrases used by Luke which slowed down the flow of the story for me.  However, I am really  glad I stuck with the book because the ending had much more depth than I expected and I found myself really rooting for this couple to both find their dream jobs and their happy ever after together.  4 stars.

Luke Martelli had one thing going for him: he knew racecars. But he didn’t get his thrills behind the wheel. Drivers wanted speed and handling, and he could make that happen. He’d been hours away from working his dream job with a pit crew when a freak accident took that chance away.

Now he works a crap job as a parade float builder in Brooklyn. Then Ellison Carlisle, a rich girl from Kentucky, has the nerve to tell him to accept his fate. What does she know about pain? But damn, she’s got the curves to match her smart mouth, and that’s a mouth he’s having a hard time resisting.

For Ellie, moving to Brooklyn was supposed to be a fresh start. She’s homesick, but getting away from painful memories in Lexington is worth the change. Until she meets Luke, the hotheaded city boy who’s entirely too sexy for his attitude.

Her track record for boyfriends is 0 for 3. Is it worth the risk to try to break that big chip on Luke’s shoulder, or is he another lost cause?

They ended the day back in front of Ellie’s apartment building. The sun sat low on the horizon, blazing through the alleyways to bathe the sidewalks, lampposts and street signs in warm amber light. Luke stood beside her, both leaning against the railing of the front stoop. They’d grabbed a burger and fries on the way back. She sipped her soda and wished the day didn’t have to end so soon.

“I had a great time today,” she said, staring down at the dried bubblegum patterns on the sidewalk.

“Me too.” His voice was quiet and distant. Was he sincere or impatient to get back home?

Maybe it was the watered-down Diet Pepsi talking, but she wanted to kiss him more than anything at that moment. But she was afraid to look up, afraid he’d be staring at his cell phone or picking his teeth or something. She took a deep breath and lifted her head to discover tender eyes focused right on hers while a soft smile tugged at his lips.

Luke slid his arm across her back, pulling her closer. He leaned in, and Ellie took that as her cue. She closed her eyes, thinking it would be just a peck. Luke’s lips made contact, but they lingered, and OMG, they were just as soft and kissable as she’d fantasized. The gentle pressure, the slight flick of his tongue and his taste sent a hot shiver down her spine. She wanted more. Lots more. Ellie wrapped her arms around his waist to feel him, so warm and solid against her.

Luke pulled back and stroked her cheek with his thumb. “I’d really like to see you again.”

“You mean another date?”

“I’d say you’re pretty damn hot yourself, for a country girl.” He grinned and winked.

Ellie’s heart thudded into an unholy pace. She hooked her thumbs into his belt loops, drawing him closer still. She could feel him beneath his clothes, his firm muscles and hot skin quivering with excitement.

He kissed her again, leaving her dizzy and breathless when he pulled away and caressed her cheek. “Goodnight, Ellison.”

“I like Ellison better.” He strode across the sidewalk, got in his car, and drove away.

She watched his taillights disappear around the block, and knew then and there that she was absolutely, totally in love with Luciano Martelli. God help her.

MJ Post is the pseudonym of a writer, teacher, and comic book fan who works in Brooklyn, NY. Watch for MJ’s first romance novel in 2018!

Mysti Parker is an award-winning author and shameless chocoholic. She writes romance for every reader’s taste from super sweet to scandalously spicy. When she’s not writing the next best-story-ever or tackling the endless mountain of laundry, she works as a freelance copywriter and editor. Mysti resides in Louisville, Kentucky with her husband, three children and too many pets.