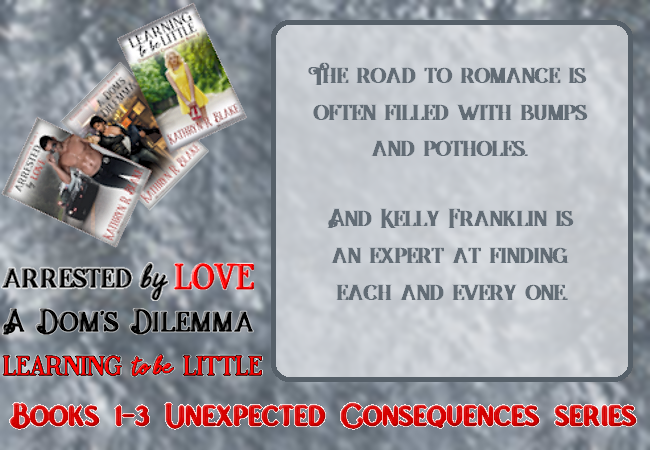 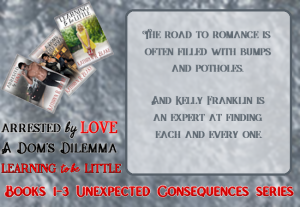 Books 1-3 in the Unexpected Consequences Series

She broke the law to catch a police officer. Only he caught her first, and then put her over his knee.

Tiffany Morgan has been in love with Kyle Sinclair since she was ten years old. Now, eleven years later, Kyle, a patrol officer, is finding it much more difficult to maintain his distance from the irresistible and vivacious redhead who continues to invent ingenious ways to attract his interest. Though he dismissed her initial attraction to him as infatuation, as she grew-up, his own feelings of desire and protectiveness deepened. So, despite his constant struggle to resist the spirited little minx’s lures, Kyle has to finally admit that he is losing that battle–badly.

However, when Tiffany’s attention-seeking pranks escalate to the point of endangering her life, Kyle decides it is past time for him to take a much firmer hand to Miss Morgan’s deliciously rounded backside.

Kyle is a firm supporter of law and order, and a man’s rightful dominion over the woman he loves. So, to make sure Tiffany understands and accepts his mastery when it comes to her safety and well-being, Kyle lays down the law, and his hand, with loving firmness. Tiffany will learn to obey him, or else. Especially now that he’s decided she is going to be his wife.

James Evans has been a police detective for sixteen years and an active participant in the local club scene for even longer. So, at age 35, he knows what he likes, and for the last three years, he’s liked what he’s seen in Kelly Franklin. Pretty, feisty and submissive, the fact that she scurries off like a frightened rabbit every time she sees him, only intrigues him more. He would have pressed a lot harder to corner her, if she didn’t already belong to someone else. That is why, when Kyle Sinclair mentions he’s looking for a new Dom to top Kelly, Jim doesn’t hesitate to sign up for the job.

Taking his cues from Kelly, Jim quickly discovers she isn’t seeking pain and punishment the way Kyle thought. In fact, all of Kelly’s signals indicate she is scared of pain, which both puzzles Jim and brings his protective side to the fore.

As a Dom, Jim is pleased by Kelly’s open responsiveness, but as a police detective, he is determined to solve the enigma she presents. Their relationship grows even more complicated when he discovers Kelly has not only been keeping secrets from him, she has lied, and neither side of him tolerates any type of deception–ever. A point he is more than willing to make with Kelly draped butt-naked over his knee–until she finally tells him the truth.

When childhood is denied you, sometimes you need to learn how to be little. 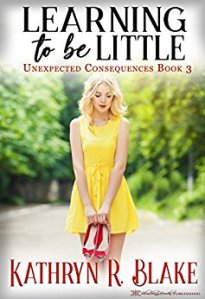 After a bleak childhood in foster care, Kelly’s growing mistrust has her running away again and again. Homeless and penniless, with no relatives to harbor her and a penchant for escaping her caretakers, Kelly is finally handed over to one of the few parish orphanages remaining in existence until she turns eighteen, when she is released.

Possessing only a little money, few skills, and even fewer resources, Kelly’s attempts at job hunting end up with her prowling the streets in desperation – until a wealthy stranger makes her a proposition she is too cold and hungry to refuse. Though it isn’t until he takes her home that she realizes just what she’s gotten herself into.

Publisher’s Note: This book contains elements of power exchange, and dynamics of age-play as well as discipline. If any of these offend you, please do not purchase.

What reviewers are saying about the series:

– I loved this book. I have always loved a good cop story and this is not just a good cop story–this is a GREAT cop story. …This book had all my personal favorites–Cops, Doms, and Cowboys

– This is one of my favorite stories. The mystery in the story really raises it to a new level. This story has always resonated with me. … A well written story that makes you think about perceptions.

– I loved this very emotional story about a young woman rescued off the streets. I read it twice and was moved to tears both times. …The entire book was well written and the character development was wonderful. It’s a must read for age-play fans.

Though Kathryn is relatively new to the spanking romance market, she is not new to stories where the hero spanks the heroine. In fact, most of her novels have some sort of spanking in them. However, even in Kathryn’s novels where the hero firmly believes in using spanking as a deterrent, he has no desire to cause the heroine injury and takes no delight in hurting the woman of his heart. In fact, sometimes he finds it extremely difficult to follow through on his threats or promises.

To date, all of her heroes are Dominant, alpha males who are extremely protective of the women they love. However, part of that protectiveness includes the desire for a certain amount of control. They do not suffer defiance or disobedience lightly. In fact, it is something they refuse to tolerate, and will take firm steps to ensure the undesirable behavior is not repeated.

Besides writing, Kathryn enjoys traveling, reading, attending the theatre, and is a passionate lover of animals, so much so that in 2015 a stray cat adopted her. The stray now sleeps in Kathryn’s bed. She has also recently taken up the expensive hobby of making and selling jewelry.