Pack Master is book four of the Undeadly Secrets series and picks up where the last book ended.  It cannot be read as a standalone.

The city of Sydney is in crisis.  It’s covered by a black cloud that continues to grow and invade causing eternal night.  Erratic behaviors are taking over and desperatio reigns. There also seems to be a new force in town, a government sect known simply as Sovereign.  Their knowledge of the supernatural is concerning and Dante is once again being forced to make impossible decisions to keep the city and those he cares for safe from harm.

Alex has no recollection of her ordeal and wakes up with no memories of Dante.  She is leaning on Michelle for strength as she tries to resume her life, but slowly begins learning that everything is not as she recalls.  The more she learns, the more she begins to learn just what her role is in saving and protecting the city she calls home. Will it be enough to to destroy the evil blanketing the city or will Sydney be lost forever?

Meanwhile, in England, Alicia Slade is on a mission to save her grandson and the child’s human mother who were stolen by an enemy alpha.  The baby is being used in experiments to create a more powerful wolf since the baby is an 11th generation alpha. Alicia will need to face incredible odds as she seeks out allies to aid her in taking back what is hers.

Nick also awakens from a coma that has lasted months to find out Nicole was pregnant.  He forms an unlikely alliance on his quest to get to and protect his family. Will he find them in time, or will it be too late?

This book – AHHHH!  It’s truly been a long time since one book was able to take me through so many emotions.  I was kind of angry and sad and left oddly satisfied and nervous feeling at the events that lead up to the ending of this book.  The author truly puts his characters through so much that we start to experience and feel everything they do.

In the vampire world, Dante always seems to have the weight of the world on his shoulders and this book is no different.  His decisions affect so many characters that it took me a long time to process how things were left at the end of the book, especially Melina.  We also discover Alex’s birthright in this story and just how strong she can be. This was a complete gem! And, much to my enjoyment, we see more of Lauren and Clive . .  I love this little secret romance and was thrilled to see the attention Aaron L. Speer gave them! Lee Nightingale is also back to provide plenty of violence, comedic one liners and sexual innuendos!

As for the wolves, Alicia Slade is a completely kick-a$$ alpha in her own right.  She is not going to let anything stand between her and her grandchild. I love the relationship she forms with Nicole as they hunt for the infant as well as her alliance with Talia.  These woman refuse to back down from a fight and I love it! Nick is also back in this book, and he’s ready to claim his family and will die to save them if necessary. Possibly the best part of this book, however, is the unlikely alliance formed between two males that should be enemies but are drawn together to save a child.

This book is action packed and never stops pushing forward.  It’s thrilling and emotional and has more plot twists than a maze!  This series offers readers a truly unique take on paranormal romance and should not be missed as each book pulls you in further and further into this crazy world that Aaron L. Speer has created.  5 stars!

THE ALPHA IS BACK 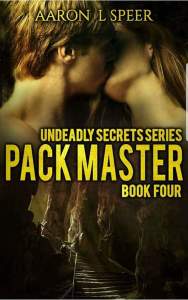 A Trilogy has been standing…Waiting…..Now the Wait is OVER!!

Alexandra Hensley awakens to a world she doesn’t recognise. The city is covered in eternal night and nothing makes sense. As she tries, desperately, to piece the past together, a well funded government sect emerges out of hiding. 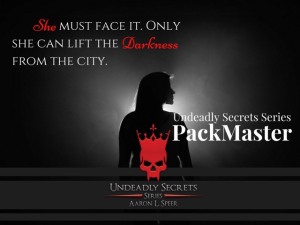 They’re heavily armed and packing an arsenal of knowledge about the supernatural forces in Sydney. One question needs answered quickly.

Are they FRIEND or FOE?

In England, Alicia Slade is faced with her own desperate question. Let her infant grandson be used as a pawn in a tyrant’s plans for domination? Or enter a civil war to retrieve him? 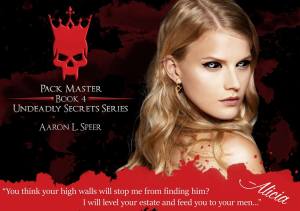 For her, the choice is clear. For her potential allies, it’s not so simple. Will Alicia have to face the insurmountable odds alone or is help not as far away as she thinks. 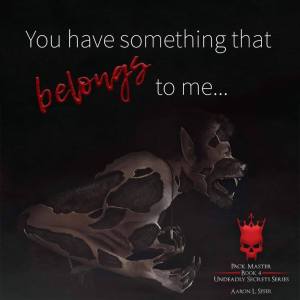 And will it be enough to defeat an entire army?

“I. LEGIT. LOST. IT. . . This book will keep you on the edge of your seat and guessing. Good luck trying to figure it all out ahead of time.” — Michelle — Michelle’s Book Blog

“The first 3 books in the series were brilliant! But Pack Master? This blew them out of the water and I didn’t think that was possible!” — Sandra — Sandra Loves Reading

🎥 Check out the trailer:
Full: https://tinyurl.com/PackMasterTrailer

**Intended for 18+. Some scenes may be too intense for some readers.**

I love writing adult paranormal fiction. Vampires, werewolves, ghosts….oh my. I’ve been writing since I was 11 but I’ve always been a dreamer……often getting caught staring off into space as I created stories in my mind.

My debut Indie Novel, Night Walker (Undeadly Secrets Series Book 1), won the 2017 Golden Stake Award at the International Vampire Film and Arts Festival held in Transylvania annually. I’m still quite chuffed about walking away with it after facing some great contenders.

The Fourth book in what some refer to as The Undeadly Secrets Saga is releasing TODAY! I also have a short story thriller series, The Independents, and will be branching out into other genres in the coming year.

My favorite activities include spending time with family, dragging my forever patient wife to watch my beloved St George Illawarra Dragons, popping into the movies for the latest blockbusters, going to the gym for my dream body. Or just a body. Anything, really.

My beautiful wife and I welcomed our first child into the world in 2017. My fans have declared him the Prince of Speerverse and claim he seems to take after me in his want to build the tension as high as possible…making us and our loved ones wait 3 long days for him to make his entrance. My wife and I live with the love of our lives in Sydney, Australia; the setting for the majority of my works.

Not enough? Leave you wanting more? Can’t blame you. 😉 Thankfully, he’s easy to stalk and loves to hear from readers 😁

Get your FANG BITE:

If you’re ever caught needing a Speerverse Fix and can’t find your FANG BITE, No worries! Just remember:
➡ http://www.aaronlspeer.com