Suddenly single and unexpectedly poor, it’s definitely safe to say that Alexis Harland is not living the life of her dreams.

Although she’s determined that nothing, not one little thing, will stop her return from poverty. Well, almost nothing. Her pride might get in the way a little. And possibly her family. And maybe the fact that she hasn’t got a clue where to start.

Many years ago, Alexis was swept away from life on a caravan park and introduced to a world of riches and glamour. All thanks to a wealthy man who married her, reinvented her… and then dumped her for a younger model at the first sign of cellulite.

Now Alexis is stranded, struggling to keep her head above water and her history a secret from her highbrow friends.

As if that isn’t enough for a woman to deal with, one night she comes home to find a sexy man has landed, quite literally, on her doorstep. A man hell-bent on testing everything Alexis thinks she knows about true happiness.

Caught between the life she knows and her blossoming love, can Alexis afford to let go of her unwavering pride, kiss her social status goodbye and accept that stepping back to square one is sometimes a huge leap forward? 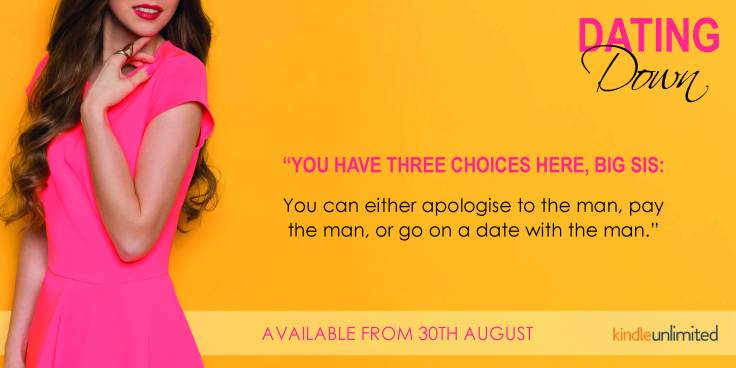 Three books? How is anybody supposed to decide on just three books to list as their favourites? It’s like that age old question. Who do you love more? Daddy or Chips?

After a tonne of soul searching and internal debating and questioning what my historic reading material of choice says about me I have settled on my top three. I think. Although, I do have a confession to make, there are more than three, because some are series, and a series can count as one book, right? So, without further ado, here is the literature which made the final cut.

Firstly, Virginia Andrews. It was a real tossup between and the Dollanganger family series and the Casteel family series or maybe the first in the Cutler series, Dawn. I read all of these as a pre-teen. Most kids break their teeth on Enid Blyton or Roald Dahl but not me. Nope, I was weaned on Virginia Andrews’ books, incest, abuse, murder all hidden behind gothic covers. Honestly, I have no idea what my mother was doing letting me read them, maybe she thought that I’d realise what a loving, normal family I had if I read about the pits of despair Andrews’ families endured. One of my most prominent school memories was of a teacher removing an Andrews books from me during silent reading, I must have been nine, ten maybe, I protested at the time. I understood all of the words so what was the problem? Eek, my nearly forty year old self is mortified. My eldest daughter is eight at the time of reading this. I really must call my mother and have a short sharp conversation with her.

I debated about whether or not to include the next book, or series, because like I say, a series counts as one book, especially if they follow the same character and because I’m a writer so have special licence to make the rules up as I go. The reason I pondered about putting it on my list because it’s not very unique. Everybody who loves chick-lit loves these books. I could almost hear the friction of unified eye-rolling when I mention the series I’m about to mention. But then I thought sod it. It’s testament to the writer that millions of people have read, and fallen head over heels in love with… Rebecca Bloomwood, the star of the Shopaholic series by Sophie Kinsella. It’s crazy. I don’t even like shopping, I bulk buy twice a year then gleefully forget about my wardrobe, but something about her resonated with me, enough to read the entire damn series. I hadn’t read an entire series before Shopaholic since my preteen, gorging on Virginia Andrews, days. So yes, Sophie Kinsella made it onto my list. And I am proud.

Last, but not least. Marley and Me by John Grogan. Yep, a book about a dog has made my top three. Why? Because this is the only book in my life I have ever read more than three times. I never, ever reread books, there are so many good books out there, and I have a bedside table groaning under the pressure of my to-be-read pile. But I read this one three times! Why? Probably because I still haven’t read the last twenty pages properly for crying. I have no idea how I came to possess the story but I started to read it with low, low hopes. I didn’t have a dog. I didn’t much care for dogs. But by the end I was ready to throw my pension at Battersea Dogs home and open my doors to every stray dog in town. I then passed the book on to my soon-to-be husband, who conveniently got sun cream in his eye when reading the last chapter. I then passed it to my mum, to my dad, to my brother, basically I passed it on to everybody who could read beyond their ABC’s.

So, there you have it, my favourite books. Or rather, the books that stand out in my mind. I could go on, but you know, word count constraints. Happy reading everybody.

Diane Louise is a dairy farmer’s wife from the UK who doesn’t know a Holstein from a Hereford.

But what she does know is how to write a funny story. Three years ago she tried to write steamy romance and sucked at it. Honestly, her stiff upper lip made her heroes more wet blankets than wet dreams. With a steely determination to avoid milking the cows, she turned her hand to Romantic Comedy and a star was born. Well, in her mind at least.

Fancy getting to know the woman behind the words?

She hangs around Facebook daily, desperately avoiding housework, and loves nothing more than chatting to fellow lovers of Romantic Comedy over at Di’s Romantic Comedy Club. Or, if you don’t do Facebook, that’s cool, because she also sends a monthly email to her readers, making sure they never miss a new release and sharing behind the scene info about her books. You can join The Monthly Club here.