Hunter by name – Hunter by nature: DI Hunter Wilson will not rest until his friend’s death is revenged.

DI Hunter Wilson is called to the scene of a murder. He is shocked to find the victim is his friend and colleague, George Reinbold. Who would want to harm the quiet, old man? Why was a book worth £23,000 delivered to him that morning? Why is the security in George’s home so intense? Hunter must investigate his friend’s past as well as the present to identify the killer and identify George’s killer. Hunter also finds a new supply of cocaine from Peru flooding HMP Edinburgh and the city. The courier leads Hunter to the criminal gang but Hunter requires the help of his nemesis, the former Chief Constable, Sir Peter Myerscough and local gangster Ian Thomson to make his case. Hunter’s perseverance and patience are put to the test time after time in this taught crime thriller.

“Didn’t the girls look radiant walking down the aisle?” Rachael’s father said to Hunter as they stood at the bar. “I felt so proud. I am so glad Rachael has found happiness, she was a miserable teenager, you know. And their flowers were very pretty, weren’t they?”

Hunter glanced around the bar. It was crowded while the furniture in the hotel function suite was being changed around after the meal to accommodate an evening reception of dancing and drinking in celebration of the new couple. Hunter watched guests taking the opportunity to get photographs, buy drinks and catch up with those they knew who had not been sitting near them at the wedding breakfast. There was a feeling of joy in the air.

“And it was a good spread for the meal,” Rachael’s father added as he turned away to walk back to the table with his drinks.

“Yes. I’ve heard this band is excellent, too. I’m looking forward to the evening, Mr Anderson.” Hunter moved to follow the man back to the reception guests, praying he would make it without tripping and spraying alcohol over anybody.

As he was leaving the bar, Hunter saw Tim wander up with his hand in his pocket.

“Can I just put this behind the bar for the wedding guests?” Tim handed the head barman an envelope. “Take drinks out of that until it is finished.”

“How much is here?” the barman asked.

“I can’t guarantee it’ll be only wedding guests, but we’ll do our best.”

“Let me count it with you, then,” said the man.

Hunter went back to the table, glad he had bought drinks before Tim’s money was there. Hunter liked his independence. He found Tim’s spontaneous generosity embarrassing, but noticed that Tim had done this quietly and at a time when most people wouldn’t notice. Sir Peter would have wanted the glory, whilst his son just wanted to do a nice thing for his friends. They didn’t need to know.

The band were starting to play as Hunter got back to his table. He distributed the drinks and sat down to put his arm around Meera.

Jane and Rachael started the dancing in traditional fashion. They had chosen Amazed by Lonestar as their first dance. All eyes were on them. Family and friends smiled and clapped and joined in as the song progressed.

So many photos were taken that Rachael felt like a film star in her pretty, tailored, elegant, white dress that showed off her long neck, slender arms and long, blonde hair. Rachael clearly felt beautiful and happy.

Jane also looked lovely in a short ivory coloured dress that flattered her toned legs, but she had never been comfortable getting her photograph taken. Ever since she was a little girl, she associated it with moving to a new childrens’ home or having to find yet another new foster family. It was never good news.

Today, however, Hunter saw her put those thoughts aside and hold Rachael close. He was so happy for her. Jane had had such a difficult childhood, but now she had her forever partner whom she adored, her forever home where she was safe, and her forever job that she knew she was good at.

Hunter smiled at her as she smiled for the cameras and she and Rachael danced to their song.  He watched as they were joined on the dance-floor by Bear and Mel, Tim and Sarah, Rachael’s parents, and Colin and Maggie holding wee Rosie the bridesmaid in their arms. Hunter thought about his own marriage, and wished Jane and Rachael so much more happiness than he had had.

Jane was so happy she started to cry and laid her head on Rachael’s shoulder. “This is the happiest day of my life, Rache,” she whispered.

As the dancers left the floor after the first dance, Hunter said to Meera, “It was unkind of you to look so good, you shouldn’t outshine the brides, it’s twice wrong, today.”

“And that is twice corny, whenever,” she replied, with a grin.

“But did it work?” Hunter asked.

“Shut up and let’s dance.” Meera stood up and straightened her dress, but immediately she stopped. Hunter was gazing out of the function suite and towards the bar,

“What’s the matter, Hunter? What are you looking at?”

Hunter was silent. There were three men at the bar. He watched them carefully. Without saying anything he wandered off, leaving Meera standing. Never off duty got old, to Meera, sometimes. He knew that. But he couldn’t help it. 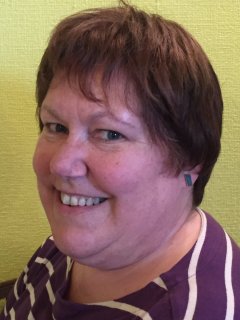 Val Penny is an American author living in SW Scotland. She has two adult daughters of whom she is justly proud and lives with her husband and two cats. She has a Law degree from Edinburgh University and her MSc from Napier University. She has had many jobs including hairdresser, waitress, lawyer, banker, azalea farmer and lecturer. However she has not yet achieved either of her childhood dreams of being a ballet dancer or owning a candy store. Until those dreams come true, she has turned her hand to writing poetry, short stories and novels. Her first crime novel, ‘Hunter’s Chase’ set in Edinburgh, Scotland was published by Crooked Cat Books on 02.02.2018. The sequel, ‘Hunter’s Revenge’ will be published on 09.09.2018.