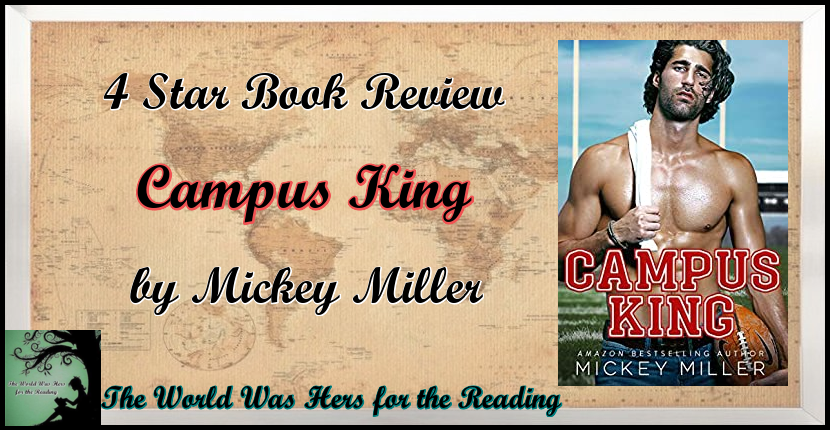 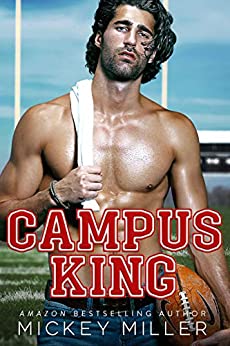 A kiss and a bit more in highschool led to a fabulous summer.  But when Colin headed off to college, Charlotte was not only left behind but ghosted as well.  Now after turning down a chance to go pro, Colin is at Greene State University . . . .and ends up being housemates with a newly single Charlotte.  While sparks fly between Colin and Charlotte,  can she trust that he isn’t a player and give him another chance?  And, what if Charlotte’s ex doesn’t want to stay her ex?

Campus King was full of college fun and antics and lots of visits from the rest of the Greene State gang and couples from prior books.  Colin and Charlotte’s romance also had a lot of missed communications and misunderstandings for just a bit of angst which added some drama.

Colin has quite the backstory that gave him more depth than expected, which I really enjoyed.  And, Charlotte was awesome.  I loved that she didn’t just jump into things but stayed true to herself and what she needed.

Campus King also had one heck of an ending which will leave readers on a high note and wanting more from the characters of Green State University.  4 stars 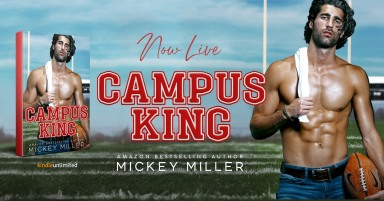 Colin West: Football superstar. Campus legend. My first kiss.
My first everything, actually.
And the first man I grew to hate.
And now, my roommate for senior year of college.

When a breakup leaves me without an apartment senior year, I’m forced to look for a new housing situation.
Luckily one comes up that’s affordable, in a perfect location.
There’s just one problem: it’s in the jock house.
Yeah, there’s me, the only girl, and three guys on the football team.

The other little problem?
One of those guys is Colin West, who has transferred into Greene this year.
After our high school romance, we didn’t exactly have a happy parting of ways.
Now he wants me back, but being with a guy like him is the last thing on my mind this year. Especially on the heels of a breakup.

I’ve just got to decide if the Campus King is for real, or if he just wants what he can’t have.

Campus King is an enemies-to-lovers standalone romance with an HEA. 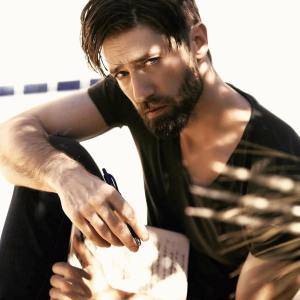 Mickey Miller is a romance author from Chicago, Illinois. His ‘dom-coms’ will make you blush as often as they make you laugh out loud. He enjoys connecting with fans “Mickey’s Misfits” via his Dirty Thursday live feeds and “co-writing” over-the-top romance stories with them. When he’s not writing, he plays guitar and sings in his band, the Dooley Band.
For a free story, sign up for my Email Newsletter:
https://www.subscribepage.com/MickeyMillerFreeBook
Text ‘Miller’ to 797979 for new release and sale updates!Join his reader group to check out my live feeds:
https://www.facebook.com/groups/MickeysMisfits/