A body guard and security specialist who feels she has something to prove.  A “playboy” prince who hides his true self from everyone around.  Sparrow and Breck are like fire and ice.  But, they can’t deny there is something between them even if neither is willing to say just what it is.

When danger seeks Sparrow out, she is forced to rely on her team and Breck for help in finding out who is after her and why she is a target.  Sparrow is out to prove she can be the team lead and doesn’t need to rely on anyone.   And Breck rubs her the wrong way with his arrogance and seemingly devil may care attitude about everything.  But, the more she is around him, Sparrow can’t deny her attraction or that she can see beneath the public persona Breck has cultivated.

Breck isn’t who he appears to be.  He cares deeply about his siblings and his people, even if he is seen only as “the spare.”  He is a genius when it comes to technology.  And, he can’t seem to stop worrying about and caring for Sparrow . . .  the one woman he has ever let get beneath his skin.

Enemy Heir was nonstop action and suspense as Sparrow, Breck and the rest of the team work together to find the enemy that always seems to be a few steps ahead of them.  While the drama plays out, so does the super hot enemies to lovers romance of Breck and Sparrow.  Ohhh, this couple has crazy intensity as they both struggle with needing anyone.  And, Breck is alpha enough to know that he doesn’t want Sparrow putting herself in danger even if she is competent and Sparrow is not willing to give up her job, even for the man she loves.  It’s an amazing push and pull as this couple battles it out amidst the chaos of everything happening around them.  And, I adored Breck and seeing who he really was underneath his facade as Sparrow found her way into his heart.

Carrie Ann Ryan and Nana Malone are a smashing collaboration, as the Tattered Royals series has been phenomenal so far.  I can’t wait for Shadowed Prince! 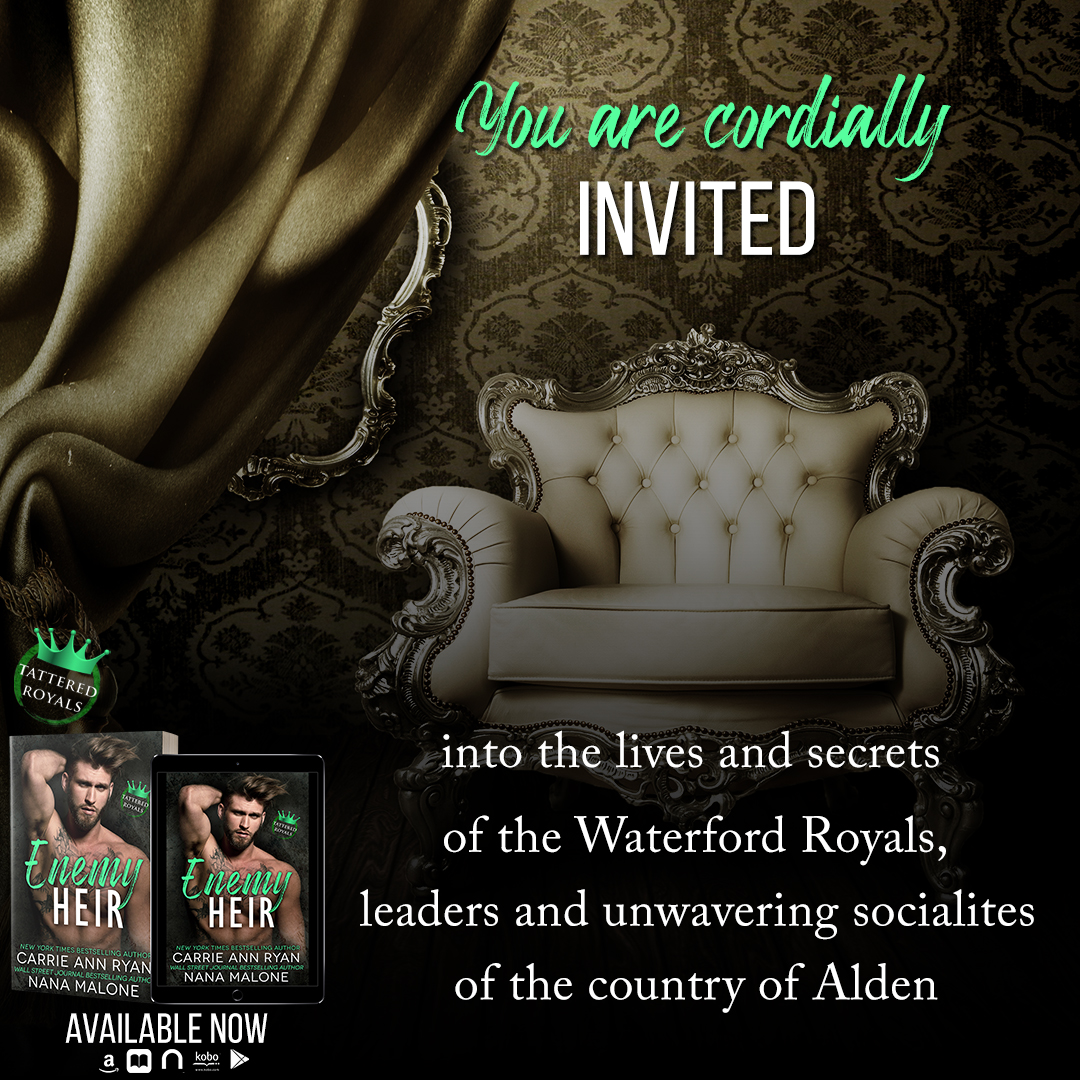 Powerful. Arrogant. Trouble. The world is his playground.

The playboy prince, the tabloid favorite, and the bane of my existence.

And unfortunately, he’s the only one who might be able to help me uncover the truth.

But letting Breck Waterford in might be the only thing to save us both.

My secrets are mine to keep, but she has a habit of finding the truth.

Sparrow Bridges can’t discover who I am under the crown.

She’s everything I told myself I couldn’t have.

I push her away every chance I can…only every time I look at her, I fall harder.

When danger comes, I can’t stand the idea of losing her before I have a chance to claim her.

She doesn’t need a savior. But anyone who threatens Sparrow will soon find they don’t want me as an enemy.

USA Today Bestseller, Nana Malone’s love of all things romance and adventure started with a tattered romantic suspense she “borrowed” from her cousin.

It was a sultry summer afternoon in Ghana, and Nana was a precocious thirteen. She’s been in love with kick butt heroines ever since. With her overactive imagination, and channeling her inner Buffy, it was only a matter a time before she started creating her own characters.

While she waits for her chance at a job as a ninja assassin, in the meantime Nana works out her drama, passion, and sass with fictional characters every bit as sassy and kick butt as she thinks she is.

Carrie Ann Ryan is the New York Times and USA Today bestselling author of contemporary, paranormal, and young adult romance. Her works include the Montgomery Ink, Talon Pack, Promise Me, and Elements of Five series, which have sold millions of books worldwide. She’s the winner of a RT Book of the Year and a Prism Award in her genres. She started writing while in graduate school for her advanced degree in chemistry and hasn’t stopped since. Carrie Ann has written over seventy-five novels and novellas with more in the works. When she’s not losing herself in her emotional and action-packed worlds, she’s reading as much as she can while wrangling her clowder of cats who have more followers than she does.

The Montgomery Ink World contains the following series, though each series is a stand alone and can be read in any order. Feel free to hop around:

The Whiskey and Lies Series

The Less Than Series

The Promise Me Series

Her Elements of Five Series is her Young Adult Romance series while her other series are all adult.

Her Talon Pack series is set in the same world as the Redwood Pack series, only 30 years later.

The Dante’s Circle, Holiday, Montana, and Branded Packs series are all individual series as well.