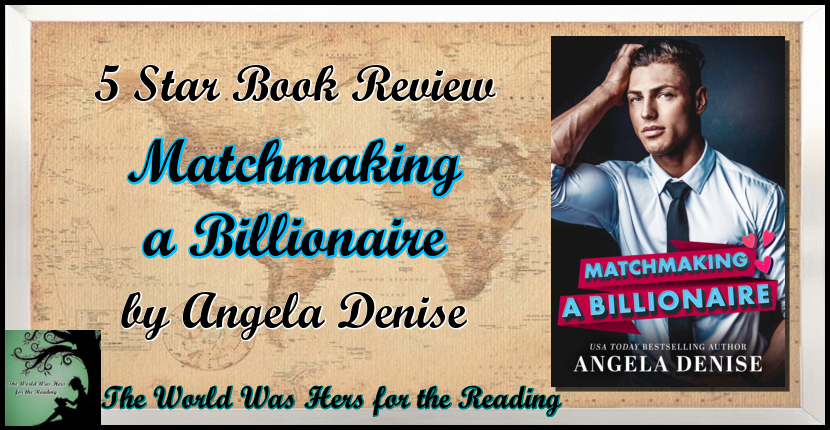 When tech billionaire Rory Byrne moves to town and approaches the Mayberry Matchmakers to work with him on a dating app, sisters Bryn and Holly are in.  Unfortunately, their opportunistic and manipulative grandmother sees this as a way to pull herself back into the spotlight insisting that Rory allow himself to be matched by her for a tv show.  Finding himself intrigued by Bryn and wanting to spend more time with her, Rory reluctantly agrees . . .

Bryn Mayberry may not seem interested in Rory, but the more she spends time with him the quicker her feelings change.  Unfortunately for the both of them, there is that pesky matter of Rory getting set up by Nana Mayberry.

Authors A.R. Casella and Denise Grover Swank are bringing all the humor, all the drama and all the naughty and nice that happen when a billionaire and a matchmaker fall in love!  These characters were really fabulous.  Rory is so easy to love.  He really is a great guy and it’s easy to forget his billionaire status while he’s trying to deal with an overbearing Nana and the completely crazy set of dates she puts him through!  And, while Bryn may appear a bit salty at first, readers will quickly see the real person underneath and find themselves rooting for this would be couple to find a way to get around Nana so they can make a match of their own!

This book was really a lot of fun to read.  It was very sweet at times with some extra spicy moments between Rory and Bryn.  Had a cast of fantastic characters I can’t wait to see more of in future books.  And, included all of the small town gossip and antics you can possibly want!  5 stars!

He’s a rich, entitled jerk and she’s falling for him fast.

“People are always watching you, aren’t they?” I ask.

Rory takes a step toward me, and I think again about all those watching eyes. Everyone in town will be watching us now, and they’ll sense . . .

Well, they’ll sense that we’re obviously in lust with each other.

“Are you watching me, Bryn?” he says softly.

Well, throw a bucket of water on me and call me the Wicked Witch of the West.

“Sometimes it’s hard to look away,” I admit, my mouth forming the words before I have time to give it a talking-to.

His eyes sparkle, as if I just confirmed something he’s wondered about, desperately. “Do you ask so many questions of all of your clients?”

“Yes,” I fib. While he might be averse to white lies, I’m not. But before that sparkle can dim all the way, I admit, “But I don’t usually offer any information in return.”

His smile burrows under my skin. Then he glances up, taking in our observers, and says, “Let me walk you to your car.”

He walks beside me, a little too close, and even though it’s a warm night, I can feel his heat leaping toward me, like flames to paper.

Once we’re away from the front of the brewery, his hand slips to the small of my back and lingers there, and if there’s ever been anything so sexy, I don’t know what it is. We’re about to pass a copse of trees on the side of the lot when he glances around, grabs my hand, and pulls me into it. We’re in near darkness, evergreens dancing around us, and we’re standing close enough that I can feel his breath feathering my face.

His eyes are so warm they nearly immolate me.

“I don’t mean to tell you how to do your job,” he says, “but I think you succeeded before you started. I want to be set up with you.”

“Micromanaging me already, are you?” I ask, a little breathless.

I should tell him no. Setting aside the whole four dates thing, we’re going to be working together. Giving into this . . . madness . . . is the last thing we should be doing, but I’ve been so lonely, and he’s more of a man than I’ve encountered in . . .

He’s the kind of man I didn’t think existed in real life, to be honest.

So maybe I can temporarily forget I’m setting myself up for disaster. Because just about a year ago, my fiancé of twenty-four hours and I broke up, and within a week he was with another woman. Within three months, he’d married her. If I let myself fall for Rory, if I let myself give in to these feelings tugging at me, insisting I acknowledge them, then I won’t just be giving myself a front-row seat to him moving on . . . I might have the displeasure of being the person who helps him do it.

Still, I find myself leaning into him. “Then quit talking and do it already.”

I used to believe in what we do at Mayberry Matchmakers, but now? Love is just another four-letter word.

Too bad my grandmother hasn’t gotten the memo. When tech billionaire Rory Byrne approaches us, wanting to develop the matchmaking app my sister and I dreamed up (and Nana shot down), she jumps at the chance. My grandmother is nothing if not opportunistic.

Of course, there’s a catch. She’ll only do it if Rory lets us matchmake him the old-fashioned way.

He’s going to say no.

Please God, let him say no.

The last thing I want to do is matchmake an entitled rich jerk…especially one who looks like sin and talks a good game.

I’ve screwed up in love a few times, but I never screw up in business. Mayberry Matchmakers has the idea for something amazing, and I have the money and the experience to make it come to life.

I should deny Nana Mayberry’s condition. If I let them matchmake me, it’ll be all over the news, and making headlines has never interested me…especially not after the personal betrayal that nearly broke me. But I’m having trouble caring about what I should do, because Bryn Mayberry is smart, snarky, and not the slightest bit impressed with me.

Actually, this may be Mayberry Matchmakers’ easiest job yet.

New York Times and USA Today bestselling author Denise Grover Swank was born in Kansas City, Missouri and lived in the area until she was nineteen. Then she became a nomadic gypsy, living in five cities, four states and ten ho uses over the course of ten years before she moved back to her roots. She speaks English and smattering of Spanish and Chinese which she learned through an intensive Nick Jr. immersion period. Her hobbies include witty Facebook comments (in own her mind) and dancing in her kitchen with her children. (Quite badly if you believe her offspring.) Hidden talents include the gift of justification and the ability to drink massive amounts of caffeine and still fall asleep within two minutes. Her lack of the sense of smell allows her to perform many unspeakable tasks. She has six children and hasn’t lost her sanity. Or so she leads you to believe.

Stay up to date with Denise, join her newsletter: https://bit.ly/3gLPtnu

ANGELA DENISE is the pen name for the writing duo Angela Casella and Denise Grover Swank.

DENISE GROVER SWANK is a New York Times, Wall Street Journal, and USA Today bestselling author and has sold over three million books. She indie published her first book, a romance mystery, Twenty-Eight and a Half Wishes, in 2011. She has since published over fifty novels, multiple novellas and short stories as an indie and with five publishers. She is published in seven languages. She is a single mother to six children and four dogs and hasn’t lost her sanity. Or so she leads you to believe.