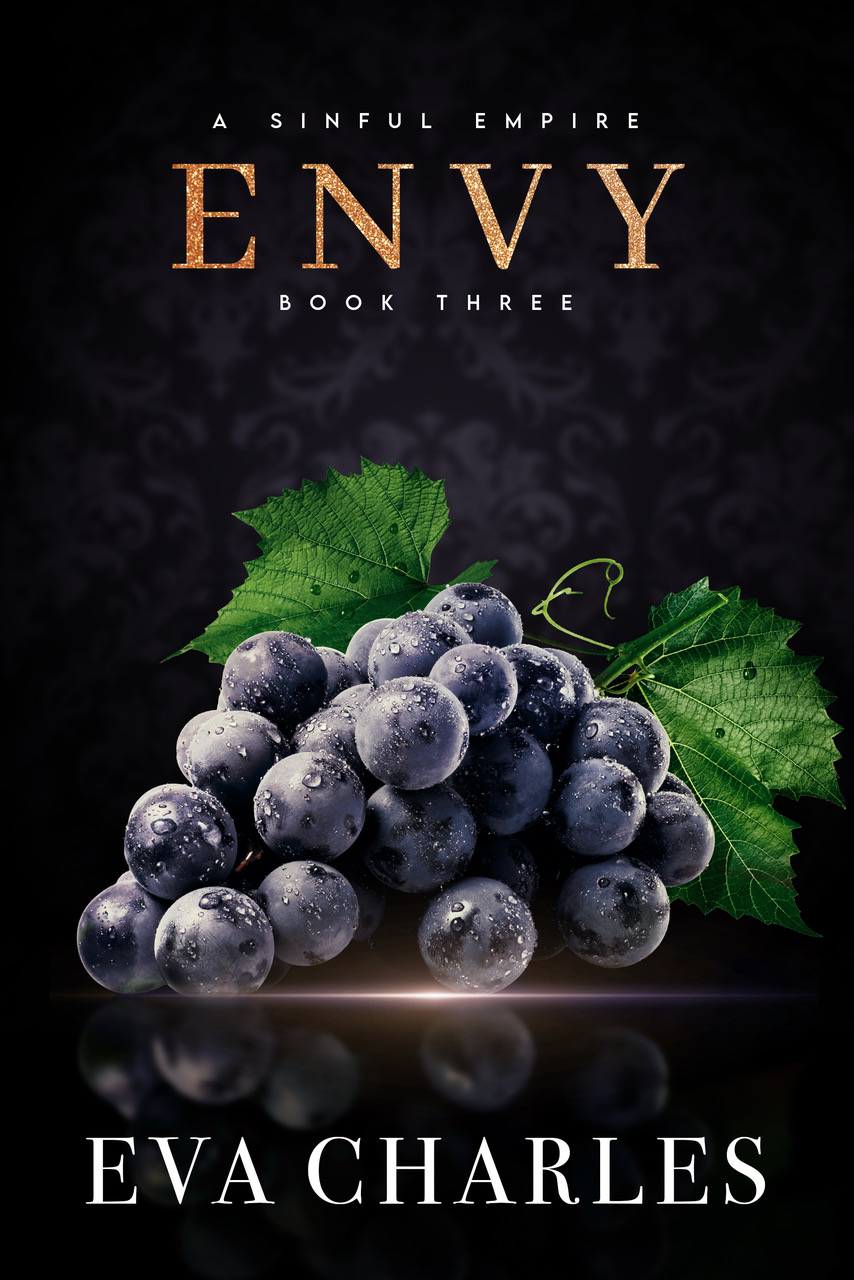 Envy Is the final book in A Sinful Empire Trilogy and picks up where Lust ended.  It cannot be read as a standalone.

Oh my word, I don’t even know how to put my thoughts on Envy into words!  Just as Antonio and Daniela start to find common ground, their enemies strike once again and threaten everything they both love and hold dear.  With every small victory they seem to have as a family, the threat to trample them looms larger and larger, becoming something that they can no longer try to ignore without tackling it head on.

While this entire trilogy has been a whirlwind, Envy is truly non stop action and suspense.  It’s a twisted tale of deception and betrayal that goes back more than a generation.  The ripple effects are catastrophic as events play out and truths become known.

These characters were everything.  So much depth.  So many emotions.  The power they have over one another.  Daniela and Antonio are a couple like none other, and they are put through the wringer again and again and can only hope to come out stronger on the other end.

This trilogy is dark.  It’s brutal at times.  The plot is woven with complexities and unexpected twists and turns.  It’s also not safe to read at work, because Antonio is really the Dark Prince to Daniela’s Dirty Princessa!  It was a true journey that had me hating Antonio on one page and adoring him on the next.  It had me feeling amazed at Daniela’s continued inner strength.  It had me wondering what a happy ever for this couple could even look like considering who they were and what all they had been through.  This book and the entire trilogy was truly an experience and I am thrilled to have been taken on this journey by Eva Charles, who not only ended the trilogy with a bang but gifted readers with not just one, but two epilogues giving Daniela, Antonio and all of these characters the ending they deserved.  5 stars and a top read of the year! 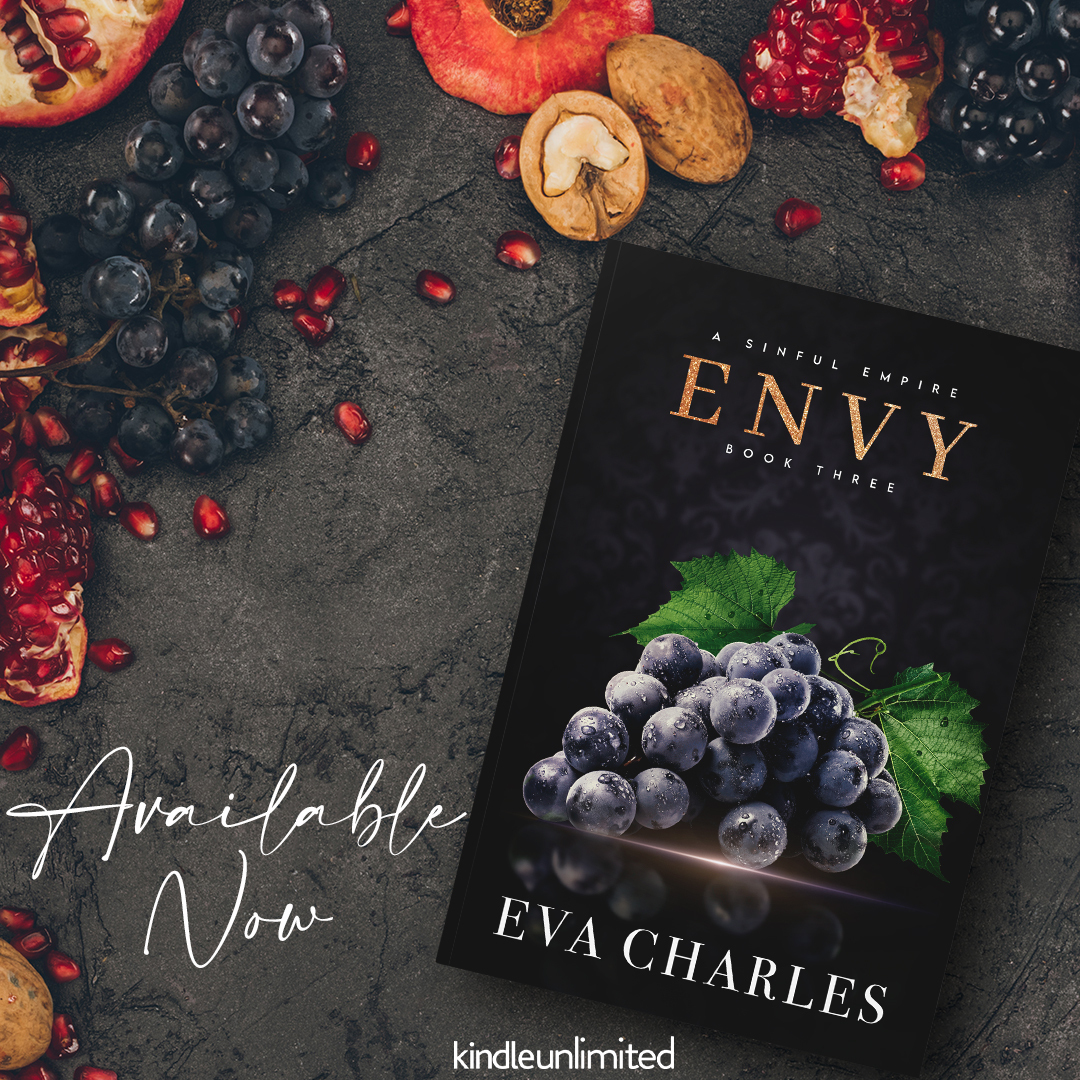 Nothing is sweeter than forbidden fruit…

Antonio Huntsman was the prince in every childhood daydream-or so I thought.
Now, I know better. He’s powerful and wealthy, but he’s no prince.

He’s a ruthless monster who thinks he can have everything he wants.
My vineyards.
My obedience.
My secrets.
Me.

He thinks I’ll marry him just because my father made a deathbed deal.

He thinks I’ll surrender to the temptation he offers so freely.

But I won’t play his games – regardless of how seductive he makes them.
I have too much to lose.

A dangerous billionaire and a young heiress play a high-stakes game, where nothing is as it appears. ENVY is the delicious conclusion to Antonio and Daniela’s epic love story, with twists and turns you won’t see coming! 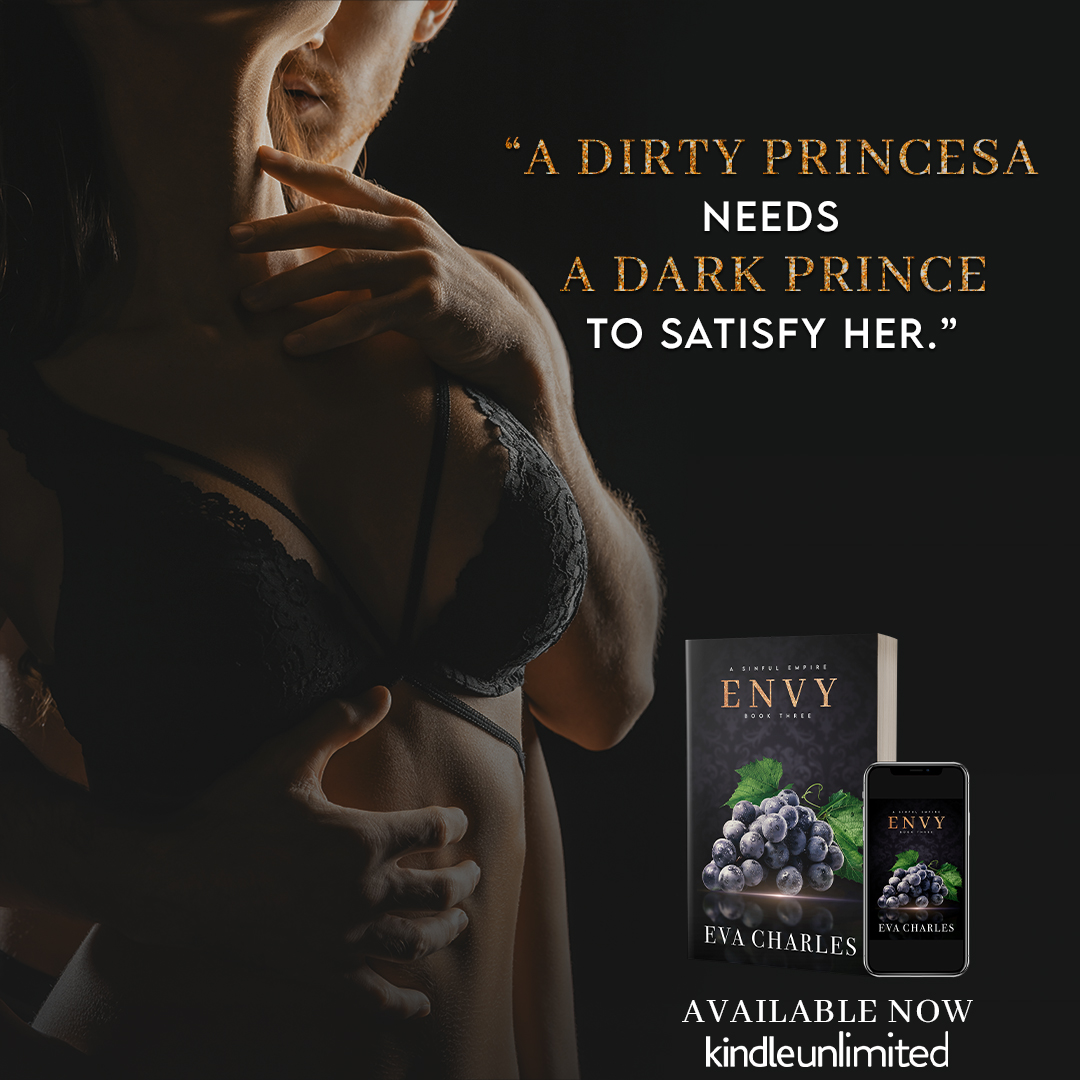 Download today or read for FREE with Kindle Unlimited!
http://mybook.to/envyec

Add the trilogy to your tbr!
https://bit.ly/3N3pnga 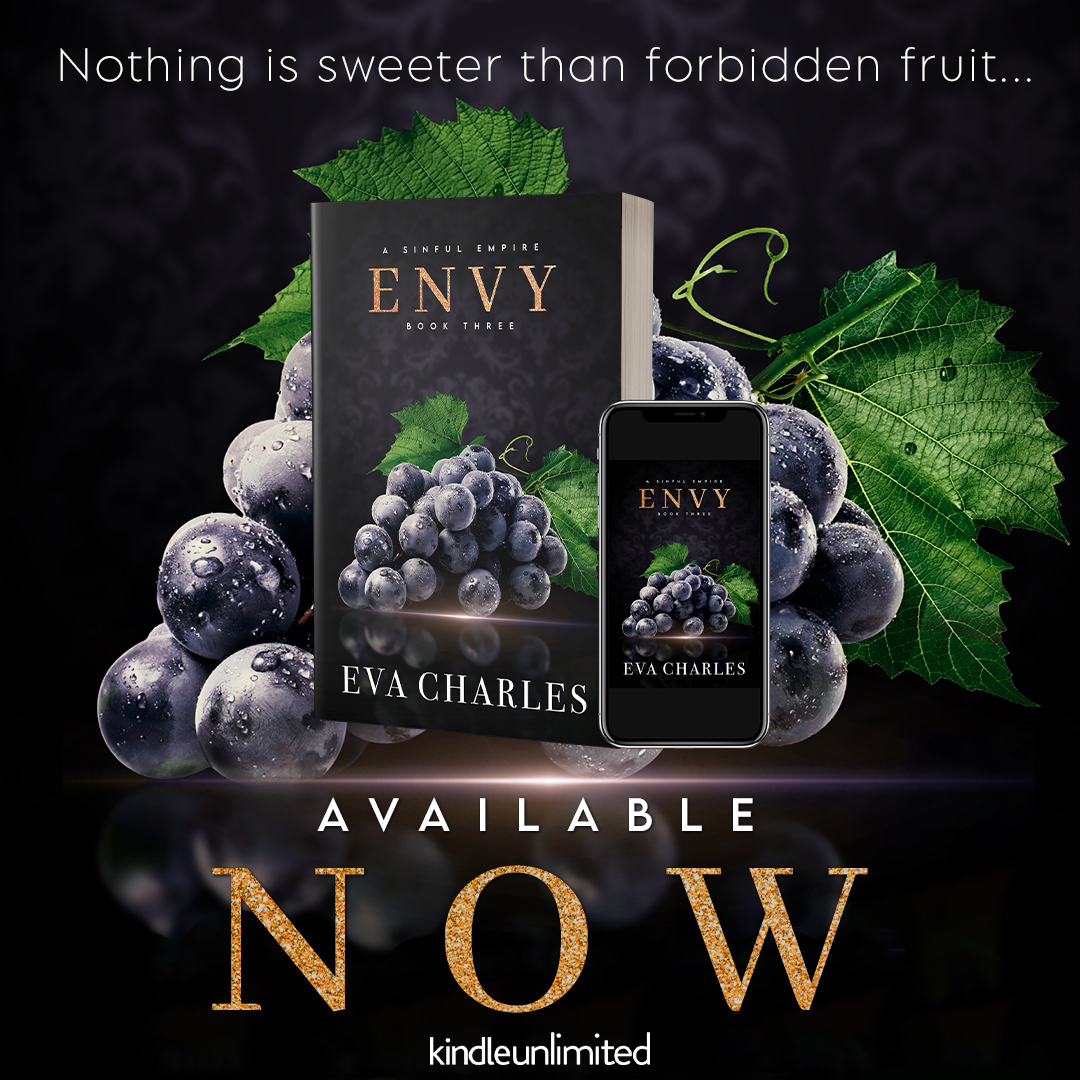 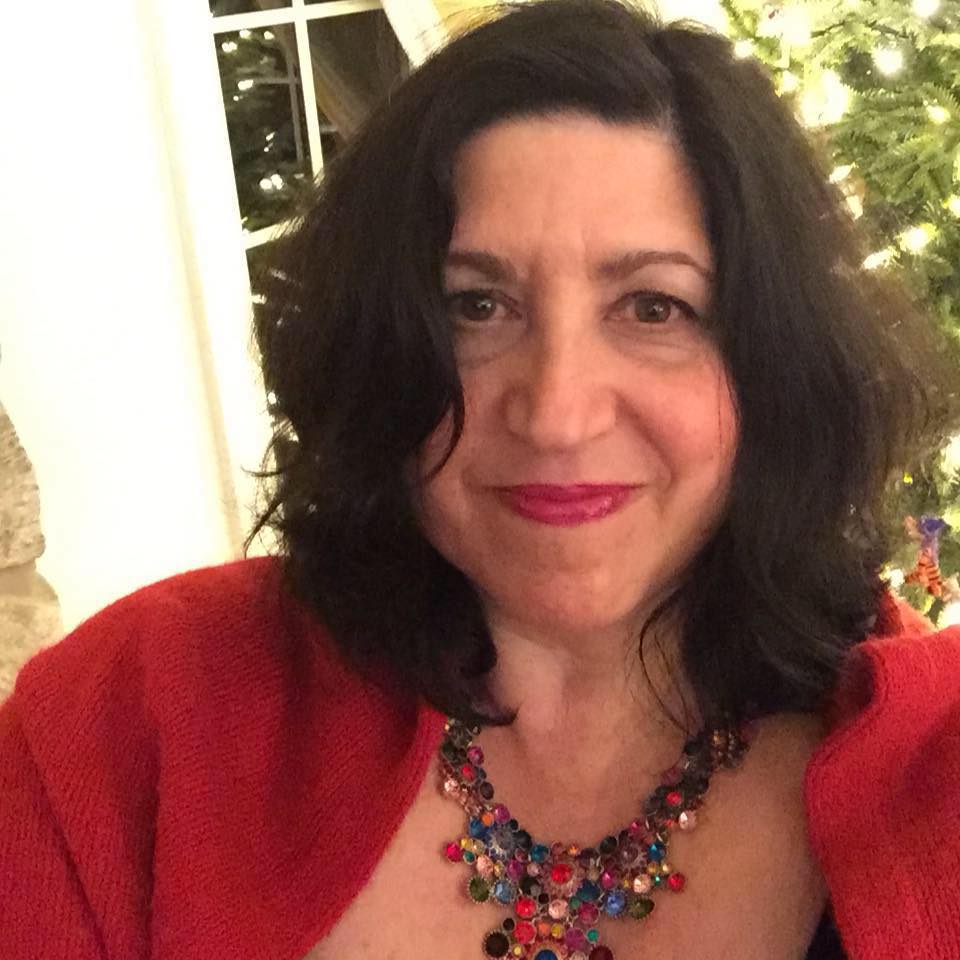 After being a confirmed city-girl for much of her life, Eva moved to beautiful Western Massachusetts in 2014. There, she found herself living in the woods with no job, no friends (unless you count the turkey, deer, and coyote roaming the backyard), and no children underfoot, wondering what on earth she’d been thinking. But as it turned out, it was the perfect setting to take all those yarns spinning in her head and weave them into sexy stories.

When she’s not writing, trying to squeeze information out of her tight-lipped sons, or playing with the two cutest dogs you’ve ever seen, Eva’s creating chapters in her own love story.